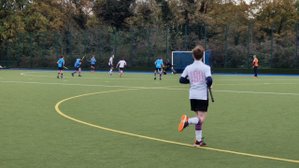 A bright and slightly chilly Sunday afternoon was the stage set for round 3 of the EH Tier 2 cup match against South West London's, Spencer HC. Following a convincing win over Surbiton in round 3, hopes were high to progress to the next stage.

The Brombeck boys started well, and the first half was an exciting game to watch with the sides seemingly equally matched and the ball running end to end with both teams wanting to put their stamp on the match. It was Brombeck that managed to break cover first, with Toby managing to slot one past the visitors following an excellent run and pass by Harry. By the half, only one short corner had been won, by Spencer but the shot was just wide and the home team entered the dressing room 1-0 up. It was a slim lead and one that needed to increase after the break.

The second half had to be about consolidating the lead and heading off the possibility of flicks. After a few minutes with a renewed vigour, BromBeck was taking the game to Spencer but it wasn't long before the tide seemed to turn and it was the visitors who were starting to take the initiative and really start to push back. There were a few really good forays into the attacking half with some excellent runs by Harry and Jayden but the home team's half seemed to be under a constant barrage of attacks. Sam and the defence was kept busy helping protect the goal and defend three short corners but Spencer were becoming increasingly frustrated with their game and rapidly beginning to lose focus and discipline. By the end of the game, they had managed to chalk up two greens and one yellow card. Brombeck wasn't able to capitalise on the depleted opposition and there was a very near miss from a Spencer short corner that could have drawn the match with 10 minutes to play.

In the last few minutes, as a light rain started to descend on the pitch, it did nothing to dampen Spencer's attack, throwing everything, literally, at the home defence. They just could not find a way through or get a shot on target to be able to equalise and as the whistle drew the game to a close, it ended their cup run. It was the narrowest of margins and nail-biting at times but they all count and this win takes the boys through to the last 16 of the competition. There is a long wait until 5 February for the next scheduled match but it gives plenty of time to reflect on the performance and continue working on gameplay and teamwork.

Thanks, as ever, to our umpire Paul Harries, Ben for getting the team prep'd and managing the match and for parents who stayed to watch and encourage the team.

12:30 meet for corners please.
Kit: White - Blue - White
If possible can all jumpers/quarter zips be Brombecks before game.